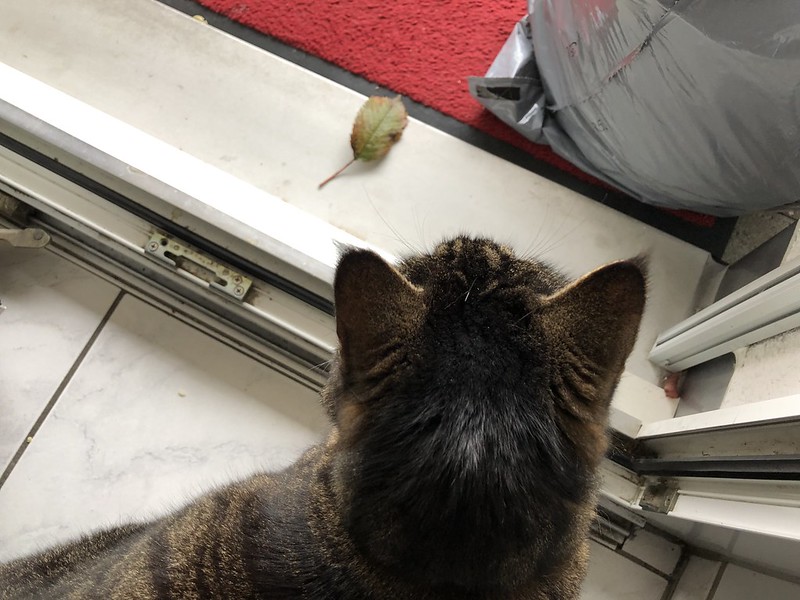 “Tabby what is so interesting? You have been staring at that window for a long while.”

“Quiet Mrs. Human, we do not want to make him aware that I am there.”

“The leaf soldier of course, it is the one that got away. The others are now dead, killed by my own paws, but this one escaped, although I am sure it is injured. It must be the chief. If I get him the danger will be over. Without a leader the leaf soldiers are defenceless.”

“Tabby they are just leaves that have fallen from the trees and the wind has blown them around.”

“Only because the leaf soldiers have captured the wind and forced it to work for them, but I will conquer them all. Now quiet, I saw that leaf soldier move. We must be careful.”

“But the leaves can do you no harm.”

“They are taking over your garden and also my walls. We will be suffocated by leaf soldiers and there is only one way to defeat them. My claws will rip them to pieces, they will beg for mercy. I have the same fight every year at the same time. They wait all year until it gets colder and then they begin to move, but it is all planned. First of all they camouflage themselves by changing colour. You notice when it begins, because they become red. Eventually they are brown which is a disguise as you do not see them so well with the earth background, but I smell them out. I would appreciate some help Mrs. Human. Perhaps you could collect the dead bodies afterwards and put them in your trash bags.”

“A good idea Tabby, do you think I should burn them?”

“No, cremation is too good for them. Just let them be taken to the communal burial place at the end of the garden and let them be seen as a warning to other leaf soldiers planning to attack. I think you can also remove the soldier in front of the window, it is now dead.”