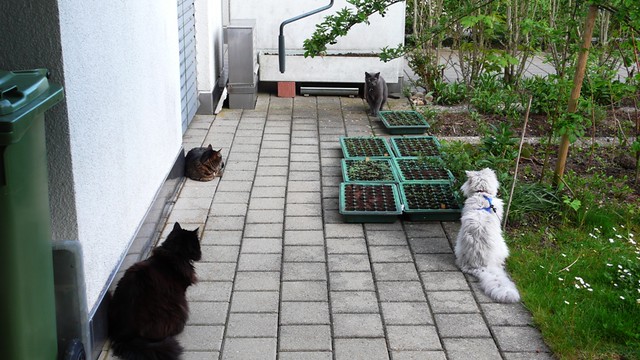 We felines are not actually groupies, but sometimes circumstances take over. For example, I was looking through my kitten album and found this group photo. You can see me on the top left, relaxing in my/our territory. Yes, at that time we had to share our territory, there was no other way, although everyone did their markings in their own space.

At the front on the left is my litter sister Nera. Mum said that she was actually a half sister as on that special evening mum was quite busy. Nera was big and fat, no sorry she always said fluffy, and was the first one to arrive in the litter. We both moved into Mrs. Human’s place and naturally took over although Nera always had the first choice of sleeping place. Nera got her 10th life a few years ago, but still pays a visit now and again, in a higher dimension of time and space of course.

And on the right we have Fluffy. I do not really know why he joined us, but I think it was a human thing. Fluffy had curls and was not really my sort of feline. He even knew who his mum and dad were. I think it was an arranged marriage. Fluffy was one of those male felines, although I think he was about as male as I was female, you know the never to be forgotten visit to the vet that we all had. I don’t think that Fluffy ever got a chance to realise that he was a male cat. And so there we were, although Nera and I had to show Fluffy who the boss was with a paw swipe now and again. We soon got him trained.

If you are wondering about the fourth feline at the back, that is Mr. Grey. He did not belong to us really, but lived next door, but he was OK. He had his own territory and Nera said to leave him to do his own thing, so we did.

Of course it was all in our younger years. Fluffy is also now living her 10th life with Nera, and I do not know what happened to Mr. Grey. I think his human moved and he decided to go with her. I never saw him again, but he was not really family.

They were the good old days, and now it is all I, me and myself which is also quite good. Who needs friends, as long as you have food.