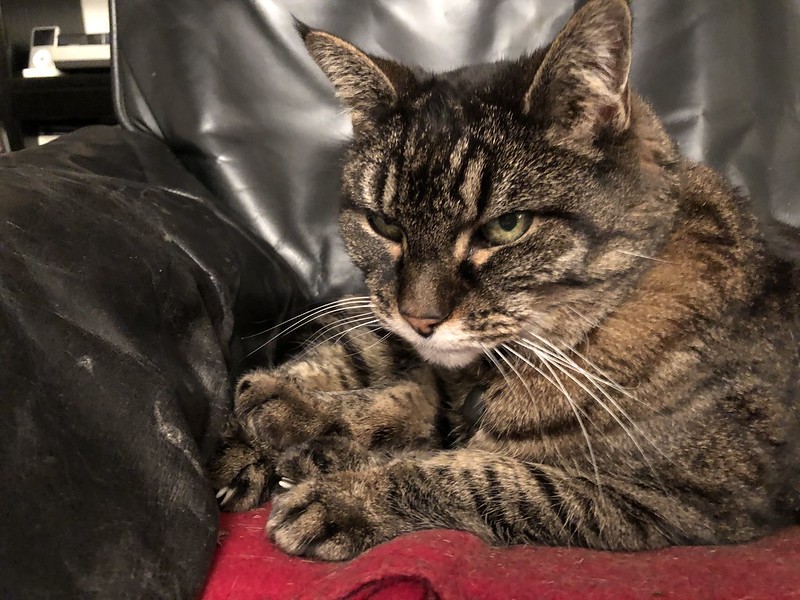 The artist has awoken from her dreams, a work lasting at least 4 hours. She is now beginning to sharpen her claws. A new work has been composed and the meows of the overture can alrady be heard. She is preparing to depart, to meet the other musicians. Will they just be howling and hissing, or will there be other instruments. Claws are being sharpened to a point and Tiddles has made the first swipe of the overture, the attack can begin.

Tabby is waiting in the wings for her appearance behind the door flap, but hesitating. Will she appear or not? I believe there was a discussion between her and Mrs. Human, the artist’s manager,  as to the artist’s salary. Tabby is refusing to appear due to a problem concerning vitamin pellets. She will only perform for tuna fish. Tiddles has left the stage and now Tabby is entering, a bowl of tuna fish being prepared. She has won the fight for a correct payment for her performance. She opens her mouth and begins to sing the first notes of the overture. The other felines howl in approval and Mrs. Human is tending to her scratches due to the artist’s wage discussion.

Eventually Roschti, the feline from next door, appears and Tabby decides to finish her performance. There are thunderous meows and paw stampings as she finishes her overture. Roschti is greeted by hisses and hairballs. It is clear who the best performer is.