Something I wrote in 2009 which also includes Tabby as an inspiration. Sorry it is a bit long, but once I got writing I never bothered so much with word count, and Tabby was also quite an inspiration. 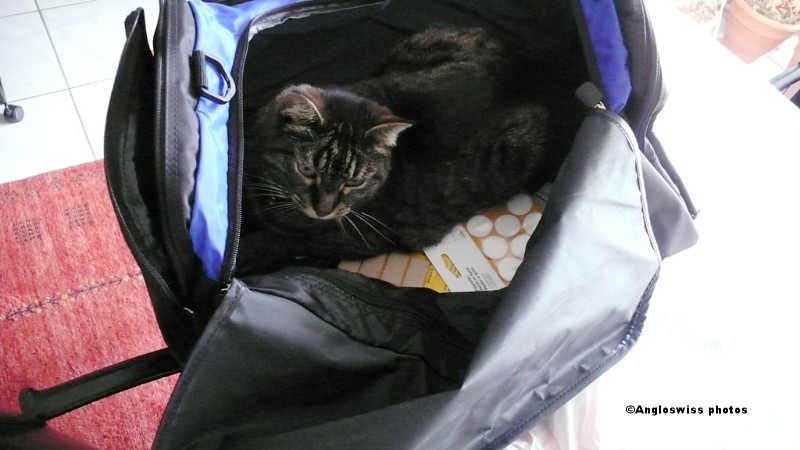 “This is it“ were the thoughts going through Dave Flint’s head when he made the red circle around the advertisement in the newspaper and he called the telephone number.

“I saw you have a warehouse to let, is it still available?”

“Yes, certainly, but I must tell you that the person it belonged to just disappeared one day and after waiting, we decided to rent it further. I cannot guarantee what sort of condition it is in, but you are welcome to have a look. Let me know when you will arrive and I will meet you there. My name is Mr. Vlad.”

“Fine, Mr. Vlad I just have one question. Is there any electricity in the warehouse?”

“No problem, there is enough electric current there if needed.”

Dave was happy, at last he had perhaps found somewhere for the band to put their instruments and equipment, and they could even use the warehouse as a rehearsal room. He called up the rest of the group, and they told Dave to go ahead, this was just what they were looking for. The next afternoon Dave got himself ready and decided to take Tabby his cat with him. You never know, there might be some vermin in that warehouse and Tabby was always a good mouser. Tabby was not so happy.

“I hope this is not going to be another visit to the vet” he thought as Dave packed him into the cage, so he did a few spits and scratching actions to show Dave his disapproval of the journey ahead. When Tabby noticed that the car was not going in the vet’s direction he relaxed and decided to see what would happen.

The warehouse was in one of the old parts of town that had perhaps seen better times. Although it looked fairly solid from the outside, Dave found that being sandwiched between a graveyard and a church was not the ideal place, but at least if the band could practice they would not be disturbing anyone.

“Good morning Mr. Flint, my name is Vlad, Mr. Vlad. I am the contact person for the warehouse. Please follow me” and Mr. Vlad opened the door to the warehouse.

“What do you have in that cage if I may ask?”

“That’s Tabby, my cat, I though she might be useful if there are any mice around.”

“I don’t think you will find any mice here Mr. Flint, but your cat is welcome to look around” and they entered.

Dave was impressed, so much room and so well built. Mr. Vlad switched the light on, and it really looked great, although Dave noticed a few things laying around.

“Does that stuff belong to someone?” he asked Mr. Vlad

Dave let Tabby out of his cage and started having a look at the objects left in the warehouse. The first that caught his eye was a guitar in a corner. He took it in his hands and played a few chords.

“Who woke me up” a voice spoke, but only Tabby really heard it. Tabby was sniffing around for something to eat.

“Did someone say something?”

“Me, of course, and there was a gargoyle standing in the warehouse looking at Tabby with its large glowing eyes.”

“Who are you?” asked Tabby

“I could ask you the same thing. What are you doing in my warehouse?”

“I don’t really know, but I think my human brought me along for company.”

“You mean that object standing over their playing the guitar. That is your human. What does he think he is doing here?”

“Stupid cat, I can see that myself. Good thing that humans only see gargoyles when we want them to see us.”

“Tabby, Tabby, come here. What are you doing in that corner? Found any mice yet?”

“Looks like your human is talking to you, as if you could answer.”

“Humans are like that gargoyle; they think we are here to do what they want. We do understand them, but they don’t have to know everything.”

Dave’s eyes suddenly caught a box in the corner. Being inquisitive he decided to open it.

“Now that is the worst thing your human can do” said the gargoyle to Tabby. “We are now going to have trouble.”

Dave opened the box and found it full of dried garlic. Although dehydrated it still smelt quite strong.

“Mr. Vlad” asked Dave, what is that box of dried garlic doing here?”

“It must have been forgotten by the last owner. I will have it removed at once.”

Dave did not like garlic, not even in a salad dressing. “No problem Mr. Vlad, I will put it outside and arrange for it to be thrown away.”

“That is a very good idea” answered Mr. Vlad with a sparkle in his eyes.

“What did I say cat, now we will have trouble.”

“Just because he threw away that box. It smells quite strong.”

“That was garlic and it was here for a purpose. It was keeping things out.”

“Things that your feline brain has never seen or heard in this world. Things that are better unknown and unsaid.”

“You gargoyles are funny creatures. What is your purpose? We cats eat mice and sometimes a bird or two, and sleep most of the time.”

“Our sleep can be eternal and we do not need food. It is only when disturbances in our surroundings occur, that we are awake but remain inconspicuous for humans. We just observe. I think your human is in for trouble.”

It was now early evening and Dave found he felt very tired. He then discovered a goatskin rug on ground, spread it out and made himself comfortable. In no time he was in a sound sleep. This did not bother Mr. Vlad at all. He knew that this would happen. He was grateful that Dave had removed the offending garlic and at last the path was free.

Tabby had a funny feeling about the warehouse. He had a gargoyle as company, there were no mice, and a curious smell was in the air, so he decided to keep an eye on things.

“Gargoyle are you awake, are you here. I could hear you from far away. I think the time has come for me.” called Mr. Vlad.

“Do we really have to go through all this again. I thought I could rest in peace and quiet for ever. Stupid human throwing that garlic out.”

“What must be will be” said Mr. Vlad.

It was then that Tabby saw the ground shift in the corner and a grave appeared. The lid shifted on the coffin. When he saw Mr. Vlad disappear into the grave he decided it was time to go. He leaped onto Dave and gave him a painful scratch on his arm. Dave was immediately awake.

“Tabby, are you crazy, that hurt. I must have fallen asleep, what’s the time” he said looking at his watch. “I think we should go, come Tabby, into your cage with you.”

It was the first time that Tabby was thankful for the protection of a cage. He had a sort of funny feline feeling inside. They left the warehouse whilst .Mr. Vlad had recovered his grave once again, thanks to Dave and his help removing the crate of garlic.

The next day Dave phoned Mr. Vlad to say that the warehouse was ideal and he and his band signed the contract. Actually he had to call a few times until Mr. Vlad took the phone, it seemed that during the day there was no-one in the office. He only reached Mr. Vlad in the evening. Dave and the band found the warehouse to be perfect. They had some alterations made and it was transformed into a concert hall. As the band were specialised in gothic rock, the setting between the cemetery and church was ideal for the atmosphere. The gargoyle and Mr. Vlad were not so happy about the noise.