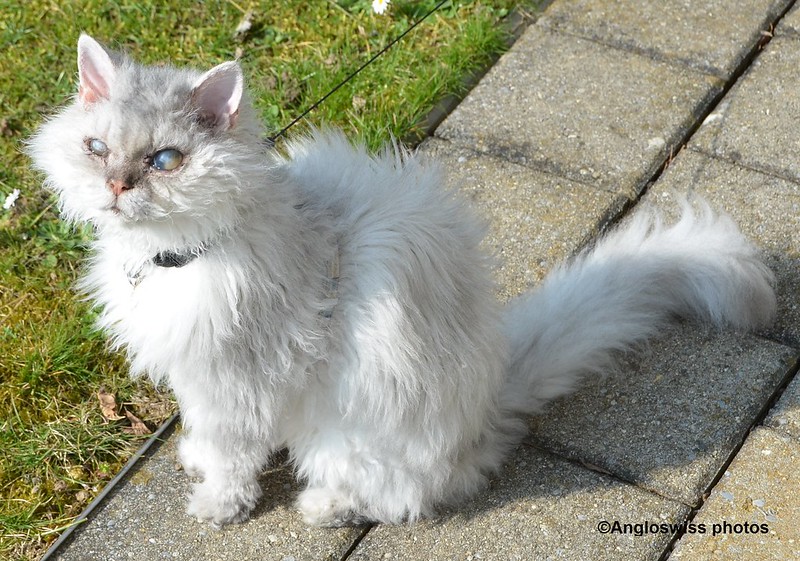 This is what it means to be fluffy, not only being fluffy, but being called Fluffy. This little cat joined my group when he was 8 weeks old, the man of the family. A friend of mine bred cats as a sideline. She was a farmer’s wife and had almost a menagerie at home as well as six children, but cats were one of her loves. I visited now and again and eventually I decided there was room at home for one more cat. She was breeding Selkirk Rex cats at the time, one of those odd breeds that happen by choice of nature. They were very curly, fine white fur and almost no whiskers because they would also grow curly, and were quite brittle.

And so I chose the most curly from the new litter. When he entered our home Mr. Swiss decided “what a Grögl” and a Grögl is a Swiss expressions for funny little thing and so the name stuck until my dad paid us a visit from London. He could not pronounce Grögl, but decided the right name would be Fluffy, and so for my english speaking colleagues he was know as Fluffy. Unfortunatly through an accident he became blind. It happened outside somewhere, we do not know how, but it was a stress for all of us. However, Fluffy did not realise he was blind and would sniff his way everywhere – no problem. He was the man of the house as my other two cats, Tabby and Nera, were litter sisters. Of course there were a few disagreements, and a hiss a day was the general greeting, but they all survived.

We found the solution for Fluffy to allow him freedom outside, as it was precarious with a blind cat. He had a collar and we attached an expandable dog lead which was hung on a long post in the garden. He had quite a long radius for his walks. Of course he escaped now and again and searching for a blind cat is not fun, especially when you do not know where he has gone. We had a plan and Mr. Swiss and I would go in two different directions with our mobile phones to keep in contact. Somehow we always found him, but bringing Fluffy home was not so easy as he preferred to roam free and would scratch and struggle. We only had one lead to hook onto him and if whoever found him did not have the lead, then you had problems, especially when he wanted to go in the opposite direction.

Bringing up a blind cat has its problems, but eventually you get used to it. He went to the eternal corn chambers a few years ago, but despite all his various health problems, lived to the age of 12 years. I still have the many photos as a memory of my Fluffy or Grögl.